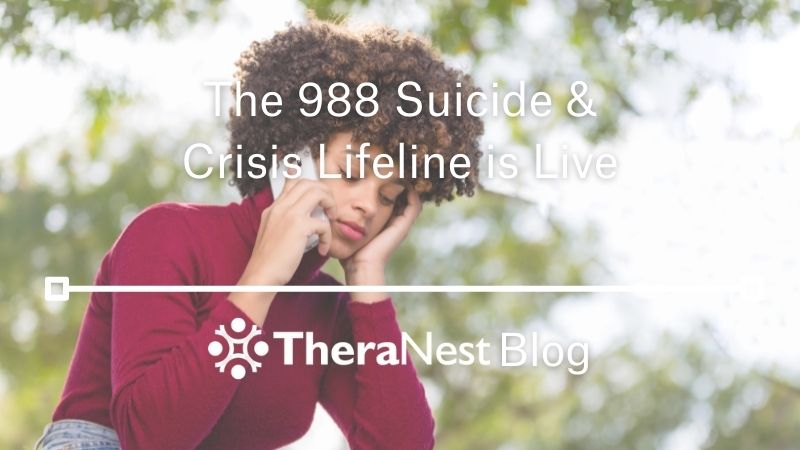 If you or someone you know is struggling or in crisis, help is available. Call or text 988 or chat at 988lifeline.org. You can also reach Crisis Text Line by texting MHA to 741741.

On July 16th, 2022, the Suicide & Crisis Lifeline went live. People experiencing mental distress can call the 988 number instead of 911 or the existing National Suicide Prevention number, 1-800-273-8255. Callers can still use that number, which will route to 988. In addition to phone calls, distressed people can text and even chat at 988lifeline.org. You can also reach Crisis Text Line by texting MHA to 741741.

People who call or text the number will be connected to a trained mental health professional working at a crisis center closest to the caller. To make sure the response is immediate, the call can get routed to one of sixteen backup centers located across the country. And if these aren’t available, calls are routed to nearby states, or to the national office at Vibrant Emotional Health, an affiliate of Mental Health America that is also an administrator of the National Suicide Prevention Lifeline.

A bipartisan collaborative effort between the Mental Health Services Administration (SAMHSA), the Substance Abuse and Mental Health Services Administration (SAMHSA), the Department of Veterans Affairs, and the Department of Health and Human Services (HHS), 988 is designed to be similar to 911, but dedicated to the mental health crisis. It’s easier to remember, so people won’t have to search for the ten-digit number. It was created to address the growing mental health crisis by providing a safety net available for everyone, and to make sure no crisis goes unanswered or mishandled. A mental health crisis or suicidal thought can happen quickly, so the goal is to make sure anyone can call and get help immediately.

What Happens When Someone Reaches 988?

The caller will be greeted by an automated message asking them to press 1 for the Veterans Crisis Line, 2 for Spanish, or to stay on the line while the call is routed to their local Lifeline network crisis center. Once the choice is made (or the caller stays on the line), a trained crisis counselor will answer the phone to provide mental health support and resources.

After texting 988, you’ll be prompted to complete a short survey to explain the situation to a crisis counselor. Upon completion of the survey, the counselor will text with you.

If You Chat at 988lifeline.org:

To chat, visit 988lifeline.org and click the chat button, which is located in the top right-hand corner of the screen. Like when you text 988, you will be prompted to complete a short survey letting your crisis counselor understand your situation. Once the survey is completed, there will be a message showing your wait -time until you’re connected to the counselor who will chat with you.

What About Other Numbers?

The old hotline number was a life-saving tool, but the number was not easy to memorize and people experiencing a mental health crisis are not always in the state of mind or even able to access the resources to search for that number.

211 is an extremely useful resource to find community resources like food banks and shelter, but it is not an emergency number, nor is it designed for the mental health crisis.

In addition, it is unfortunately common that law enforcement agencies to respond to 911 calls regarding erratic behavior caused by mental illness with force and aggression. This can lead to violence, trauma, and even death. Having a dedicated resource helps prevent violence, focuses trained professionals on the issue, and helps reach people who might not trust law enforcement during their crisis.

While 988 is still young, and there’s still a long road ahead in terms of legislation, funding, and resources, having a dedicated number for mental health crises reduces the stigma associated with mental health issues, and makes mental health support more accessible. Mental health emergencies are finally getting recognized as valid and needing their own resources. And offering this support to people in need can prevent violence and save lives. It’s a solid start that, if implemented correctly, can provide a strong foundation to help people experiencing a mental health crisis. According to a PEW study, 988 could field between 24 and 48 million calls, texts, and online chat requests by 2027. In 2020 alone, nearly 46,000 Americans died by suicide. That is a considerable number of lives that could be impacted, not to mention the people and communities around them.

988 could also help reduce the considerable pressure on other emergency services like 911, helping to reduce wait times and make resources stretch further. Many people experiencing a mental health crisis are fearful of reaching out, fearing law enforcement involvement, involuntary hospitalization, or social repercussions. It could also help underaged people reach out and connect to counselors who can help them. Children and teenagers can struggle with suicide just like adults do, and it can be difficult to handle for emergency personnel or law enforcement. It could also be lifesaving for people who struggle with serious mental illness to have someone call 988 instead of 911 if they display erratic behavior.

Make no mistake, even a single phone call could save a life. According to Harvard University, nine out of ten people who attempt suicide and survive will not attempt suicide again. While a suicidal crisis is dire, it also tends to be short-lived when managed properly. The survival rate increases again if the sufferer gets a follow-up call. “Talking” someone out of suicide or other mental health emergencies is not easy, but when a professional can be reached, they can offer empathetic and compassionate support and care that could have a lifelong impact.

Mental health communities are underserved, and a mental health crisis can be life-threatening. That’s why it’s essential to share resources. SAMHSA put together a toolkit that allows organizations to make sure everyone knows about 988. Use this toolkit to minimize confusion and raise awareness more easily. It includes everything from newsletter templates to printable materials and 988 branding.

To volunteer or get a job in a crisis center, visit www.samhsa.gov/find-help/988/jobs.