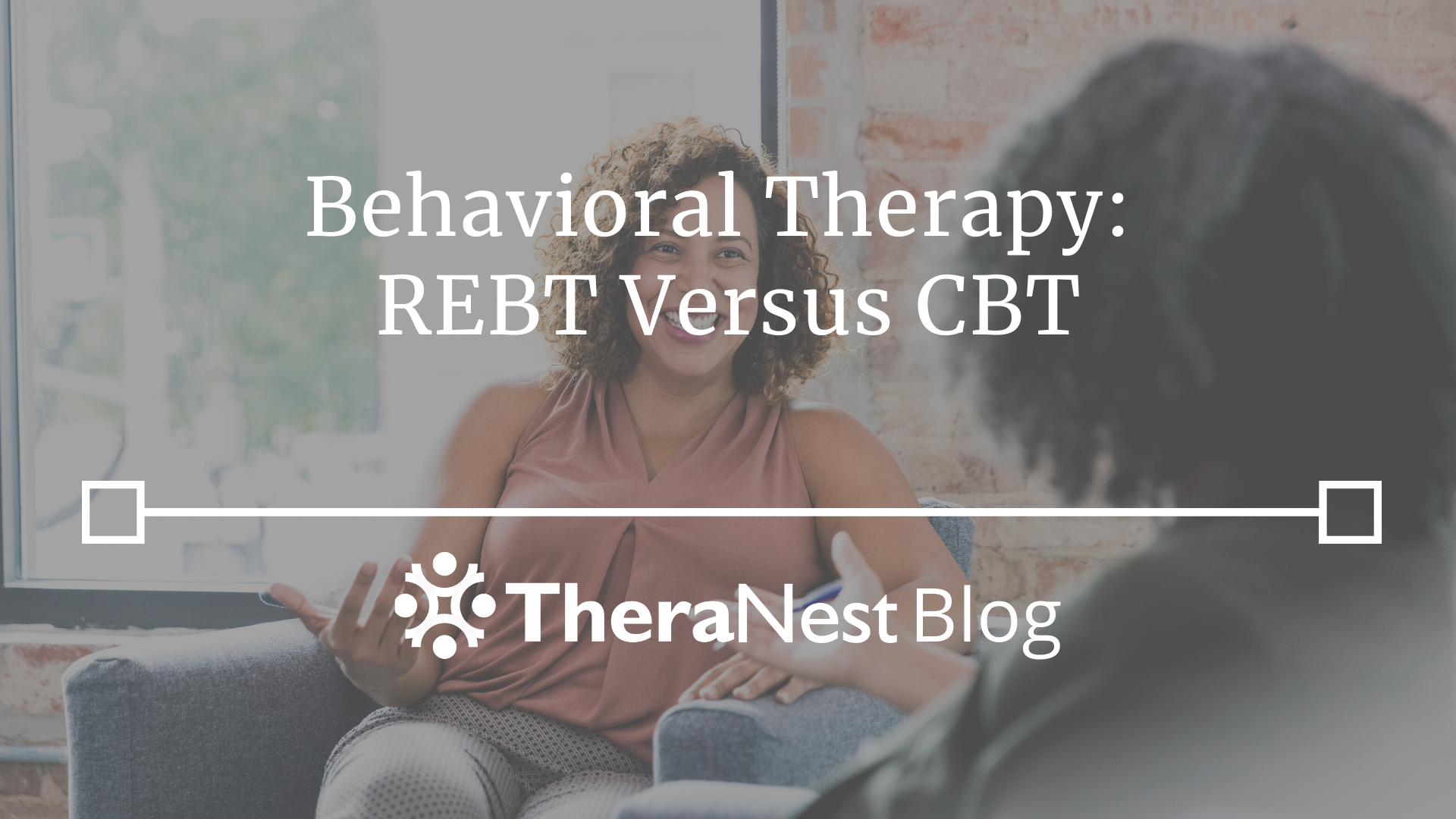 In therapy, there are many different approaches, theories, and techniques that mental health providers use to help their clients navigate circumstances and develop healthy emotional skills. What theories a provider uses may depend on a variety of things like preference, but ultimately boils down to the needs of a particular client. Some lines of thinking might apply better in certain situations or with patients that have specific emotional needs. Two of the most common types of therapy include Cognitive Behavioral Therapy and Rational Emotive Behavioral Therapy. So what is the difference between the two?

What is Rational Emotive Behavioral Therapy?

Rational Emotive Behavioral Therapy, or REBT, is actually the earliest form of Cognitive Behavioral Therapy. CBT has changed over time and looks different today than it did during its origin. REBT aims to ultimately alter a person’s underlying belief about themselves, those around them, or life in general. This theory highlights the irrational, or self-defeating behaviors of a person such as shame, guilt, pity, or any other negative lines of thinking.

Originally created by Albert Ellis in the 1950s, Rational Emotive Behavioral Therapy assumes that individuals are impacted by their thinking surrounding situations rather than the situation itself and that perception play a critical role in how a person feels.

What is Cognitive Behavioral Therapy?

Cognitive Behavioral Theory, or CBT, is a therapy that branched off of REBT. This theory focuses on a person’s behaviors as they relate to their emotional state. Therapists that practice CBT aim to identify patterns in behavior or thoughts that are having a negative impact on that client’s life and seeks to change them so the client can improve.

Major Differences Between REBT Versus CBT

The Recognition of Secondary Disturbance

Secondary disturbance refers to what equates to a second-tier disturbing thought that is stacked on top of another. For example, someone might feel guilt about always feeling anxious. Anxiety is the first disturbance and guilt is the second. Rational Emotive Behavioral Theory recognizes secondary disturbances as something plays a role in mental health conditions. The cognitive-behavioral theory generally ignores the line of distinction between disturbing thoughts and instead searches for the root cause for all of those thoughts together.

While both CBT and REBT aim to address self-esteem, their approach is entirely different. Rational Emotive Behavioral Theory believes in something called Unconditional Self Acceptance (USA) in which a person is to think of themselves highly no matter what. Cognitive behavioral theory seeks to uninforce negative feelings toward oneself by reinforcing positive attritutes about a person. For example, a therapist practicing CBT might acknowledge that their teen client is struggling with a certain subject in school, but that does not make them unintelligent. They would then enforce positive attributes by highlighting all of the ways that the client is smart in other subjects or in other areas of life.

The level at which anger is viewed as appropriate varies greatly between either type of therapy. CBT is not absolute in its thinking in the sense that it believes some anger is constructive. For example, if a client is having difficulty asserting themselves or is in a relationship where someone is taking advantage of their kindness, mild anger and confidence might be appropriate in the situation so that the client can find the courage to speak up for themselves. REBT disagrees with this approach wholeheartedly. In Rational Emotive Behavioral Therapy, it is maintained that all anger is wrong at its center. REBT instead recognizes and aims to teach alternatives to anger. Both believe in the usefulness of assertiveness, but CBT does not remove anger from the possible emotional center of the solution.

Both Rational-Emotive and Cognitive Behavioral Theories are valid in their application in current client settings. Which one a therapist chooses to apply boils down to what works best for the client, their core beliefs, or what will help them succeed. For example, clients might benefit from REBT if they struggle with anger issues or whose issues are centered on their central beliefs about themselves. Other clients might benefit from the CBT protocol if they have a long history of thought patterns that need to be undone in order for them to succeed.

Ready for an EHR that gives you all the tools you need for your practice management?